Pet (ペット, Petto) is a manga series written and illustrated by Ranjō Miyake. It had an anime adaptation first scheduled for October 2019. This was then rescheduled and began airing January 5, 2020, directed by Takahiro Omori and adaptated by Geno Studio.

A sequel entitled Fish is scheduled for Winter 2020.

In a world where some have the power to enter people's minds, there is also a danger. The power of controlling memories can be used as a weapon or tool. Mysteries can be erased, minds can be destroyed.

However, this power can backfire and eat up one's heart. To counter it, chains are used to lock and protect each other's weak and dangerous heart. From one's growing fear and disdain, they're consequently called "Pet."

The five-volume remastered edition was published by Enterbrain beginning October 26, 2009, and completing January 29, 2010. 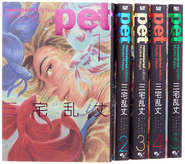 The five remastered editions by Enterbrain.
Add a photo to this gallery

Retrieved from "https://petto.fandom.com/wiki/Pet_(Manga)?oldid=3766"
Community content is available under CC-BY-SA unless otherwise noted.